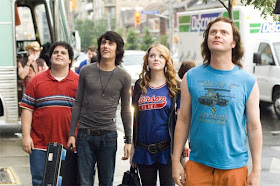 Remember Pete Best, the former drummer for the Beatles who was famously kicked out of the band before they made it big? Poor Pete Best, what could have been. “The Rocker” tells a similar story as a comedy vehicle for “Office” star Rainn Wilson. It’s more feel-good family friendly comedy than gut-busting funny. A tone of wholesomeness runs throughout diluting some of comic talent in the film.

Rainn Wilson is Robert ‘Fish’ Fishman, the drummer for a “Motley Crue”-like 80’s hair band. When they’re just about to be signed to a major label their manager tells the band to ditch the drummer to ensure their success. With little hesitation the Fish is gone, his dream smashed. 20 years later he's working a dead end desk job, still harbouring ill feelings toward his failed music career.

When his teenager nephew asks him to be in their high school band, suddenly his enthusiasm for drumming is sparked again. At first his gung ho 80’s rock attitude is like oil and water with the underage inexperienced teenagers playing guitar, bass and keys. Fish’s attempt to relive those early years of groupies and hotel trashing bring only shrugs. As the kids learn to be rockstars, Fish courts the mother of one of the band members, helping him gain the confidence of a mature man.

Rainn Wilson tries his best, but this isn't his breakout lead performance. He’s likeable and goes all out for a laugh, but it’s like Dwight Schrutte were the star of “the Office”. There’s just not enough soul to carry the entire film.

While Richard Linklater’s “School of Rock” managed to make a kids-friendly rock comedy fun for adults through the passionate force of Jack Black, Wilson never achieves the same passion. Without this Peter Cattaneo’s formulaic narrative stands out as predictable and tired.

Will Arnett, Fred Armison, Jeff Garlin, Jane Krakwoski are wasted as cameos more than utilizing their comic talents. Only Jason Sudekis who uses his SNL ‘Asshole’ persona to play the band’s ego-tripping manager, David succeeds He’s the best part of the film, which isn’t saying much cause he’s only a minor player.

It's interesting to see the influence of "Guitar Hero" and "Rock Band" on the film (Fish at one point bonds with his girlfriend while playing 'Guitar Hero') the purpose of which is to put ordinary Joes on the stage and capture the feeling of living out one's dream as rock stars. And so, perhaps for a certain demographic, the film succeeds.