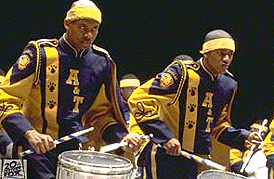 A modest but profitable hit film in the genre of sports cinema is “Drumline” a formulaic but fun sports film about competitive marching bands.

There’s a great tradition of competitive bands in high school and college, especially African American schools like ‘Southern University”. It’s so important that schools give out full scholarships to the best musicians. This is what happens to Devon Miles (Nick Cannon) a cocky young Harlem student just graduating from high school. Of course, he has massive chip on his shoulder evidenced by his improvisational drum solo at his convocation. But when he goes to an esteemed Atlanta-area university to drum he finds it will take more than just raw talent to succeed at the highest level of banding.

“Drumline” is like the ‘Top Gun’ of band films, a silly but relevant comparison. If Devon is Maverick, the egotistical reckless rebel who can’t channel his talent, his Iceman is Sean (Leonard Roberts), the drumline’s section leader, a senior student who commands the group with military-like control. The Tom Skerrit character is Dr. Lee (Orlando Jones), a man continually frustrated with Devon’s behaviour and his distracting one-on-one battles with Sean. Eventually Devon gets kicked out of the band for lying on his college application when Sean finds out he can't read sheet music. But with the band struggling Sean and Devon will need to bury the hatchet in order for the school to win the big championship against their crosstown rivals.

The purpose of "Drumline" is to showcase the phenomenal artistic talents of the competitive bands. Choreography and composition go hand in hand for director Stone. Even from his opening shot which frames Devon’s graduating high school class from high above, creative compositions and visual patterns are a consistent theme. When it comes to the music set pieces, with the aid of Shane Hurlbut’s fine cinematography (yes, that Shane Hurlbut – google him if you don’t know who he is), these sequences visually pop out of the frame like a complex kaleidoscope of motion.

Like “Top Gun” “Drumline’s formula is often plodding and predictable, screenwriting 101, with every beat hit with the precision of the film’s musicians. But there’s a reason why formulas exist because when done right it produces a familiar sensation, optimizing every emotion for maximum dramatic impact. For this reason “Drumline” makes for great disposable Sunday afternoon hangover-healing couch surfing. Enjoy.