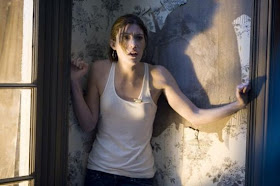 “Quarantine” tests the waters once again of the fake video camera films like “Blair Witch Project” and “Cloverfield”. Told from the point of view of a news crew on a story about LA Fire Fighters, a zombie horror crisis arises in a locked down tenement building. It’s a remake of the Spanish horror flick “Rec” directed by Jaume Balagueró and Paco Plaza of which I confess not having seen, so I can’t say, “the original was better’. So take this review as unbiased.

It’s Los Angeles and a young, ambitious and spritely TV news reporter Angela Videl (Jennifer Carpenter) is doing a story on fire fighters. From the point of view of the TV camera we follow her through the fire hall and meet the fun loving working class fireman who gab and joke around with typical male machismo. When a call goes out for a fire, finally Angela gets the action she’s been waiting for.

She and the cameraman (still rolling) tag along covering every moment of the action. When they arrive at the building it’s just a medical emergency, a crazed woman frothing at the mouth has to be subdued by two cops. No big deal right? Wrong. When they think all is well, the body of one of the cops is dropped over the staircase rail to his death. WTF? More and more people start exhibiting strange behaviour. Before long Angela and her pals are in a Romero zombie film. When they find themselves locked in or “Quarantined’ it becomes a clausterphobic game of survival – all in front of the cameras.

I had a major problem with “Cloverfield’s” stylistic starting point – the point of view camera. While it’s an interesting way to tell a story, for me it never enhances the story beyond what could be told with traditional coverage. In "Quarantine" since the camera is actually a TV ENG camera, the picture quality and camerawork is broadcast worthy so we’re saved from the nauseating handycam shake of "Cloverfield". Thank god.

Though the presence of the POV camera is meant to create a world of reality, the filmmakers are still manipulating us with traditional cinema techniques. For example, there’s a scene toward the end when Angela fearfully avoids a meandering zombie. She covers underneath a desk while watching the scary beast wander around. The camera holds on Angela’s close-up instead of the zombie. This is cinema, not reality. If this were a real newsman, he’d film the zombie – a much more compelling image than the news reporter. This is the image I wanted to see as the viewer as well. But Dowdle is a filmmaker before he is a newsman and so his cinema instincts is to show the reaction of his character instead of the action itself. By not showing the zombie he’s teasing the audience (like Spielberg not showing the shark). It works for cinema but not for news.

This is just one example of the contradiction this new POV technique never gets right, and why “Cloverfield” and “Quarantine” is frustratingly distracting. The irony is that the technique actually gets in the way of the story, as opposed to freeing it up.

But how is the film you ask? Even though rabies is the disease, it’s still a zombie movie – but a decent zombie movie, as cynical and uncompromising as any in the genre. Though Jennifer Carpenter becomes more and more annoying as the picture moves along we genuinely care about Dowdle's characters and want them to escape. Genre fans not bothered by the style will be stimulated by this decent genre film.